Skiing is a sport that primarily requires snow in order for the person to slide down from the top of the mountain or even a hill. Tourists from Alaska, California, Korea, and other parts of the world where snow falls may now be able to ski in Dubai. Yes, you got it right  ski in Dubai  one place in the face of the Earth where the weather is humid and most of the area is filled with sand dunes and desert lands. But because of the foreign tourists and migrants that come rushing in from all over the world, Dubai decided to have another attraction that would surely tickle the interest of both locals and tourists in this emirate.

People may now be able to fill the thrill and excitement of skiing here in Dubai. But why, of all places, you would want to ski in Dubai? One reason is that the Dubai ski course is done indoors. Of course, no matter how fast they construct the artificial ice or snow, if you were to ski in Dubai outdoors, it will eventually melt. Chances are, you will be skiing in mud instead of snow. There are several indoor areas where you can ski in Dubai that has real or artificial snow is not seasonable unlike in some parts of the world such as North America or countries located in Europe. 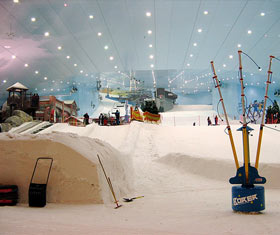 The first indoor ski in Dubai is the Ski Dubai. It is located inside the premises of the Mall of the Emirates. The Ski Dubai has at least five runs. Each run has a different height, gradient, and difficulty. The longest run in this indoor ski in Dubai stretches up to 400 meters and having a fall of more than 60 meters. For professional snowboarders and skiers they may practice their moves and show off their stunts at Freestyle Zone of the indoor ski. For those who do not want to do this fun activity, especially those who have toddlers with them, they may go to the Snow Park area of Ski Dubai. The Snow Park embraces at least three thousand square meters and considered as the biggest snow park in Dubai and the rest of the world. Ski Dubai is so big that the total area covered by this is almost the same size as three football fields. This indoor ski in Dubai is ready to lend you the necessary equipments and ski clothing so you dont have to pack your own with you. Even if you wont be skiing, you still need a clothing that would keep you warm while inside the Ski Dubai. The temperature is kept at negative 1 degrees, almost the same temperature in the real outdoor snow, without the frostbite.

At this indoor ski park in Dubai, you would not only experience skiing in this hot island but may taste different delicious delicacies as well. There are two restaurants in Ski Dubai and has very unique central themes. The first restaurant is located at the main entrance of Ski Dubai, called Saint Moritz Café. On the other hand, the second restaurant is called Avalanche Cake located at the mid-station. It is overlooking the slopes and people who wanted to ski in Dubai.

With all the facilities and equipments available in Ski Dubai, this is 22,500 square meter indoor ski field is definitely the best place to ski in Dubai. You may ski in Dubai by group since they allow group bookings. It can accommodate almost 1,500 visitors without the whole area being so crowded. Moreover, kids would also enjoy having their parties here because of the private rooms especially made just for them.